The City of Allen 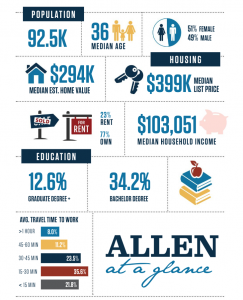 The City of Allen can be found “nestled among scenic trails and resting beside one of Dallas’ major thoroughfares, a destination filled with options and opportunity.” It is a big town that maintains a small town feel and is great for families, young professionals and retirees. With endless shopping, dining and recreational activities, the City of Allen quite literally has something for everyone.

Allen’s low cost of living, thriving economy, highly ranked schools, housing inventory, low crime, convenience, as well as its cultural and recreational amenities consistently puts it on the top of the nation’s “Best of” lists. The City of Allen has received national recognition from “Family Circle”, “Money Magazine”, “Forbes”, “WalletHub” and “Safe Wise”.

The City of Allen has received the National Gold Medal Award for their parks and recreation system, the Governor’s Community Achievement Award for environmental programs and recognition as a top Digital City.

Nationally recognized, Allen has an award-winning school system that is serviced by three school districts: Allen ISD, Lovejoy ISD, and Plano ISD. Each district operates independent of the city and receives its funding by their own taxes and governance by their own administrations. Students are zoned based on their home address and their designated school can be viewed by using the school district locator tool.

The City of Allen is well equipped to care for it’s residents in their moment of need. The City’s Fire and Rescue has been recognized nationally for innovative training and for the administration of advanced life-saving medical protocols. Additionally,  the Allen Police Department is a Texas Law Enforcement Best Practices agency.

NAMED ONE OF THE COUNTRY’S 10 BEST TOWNS FOR FAMILIES AND BEST CITIES FOR YOUNG FAMILIES, ALLEN IS A GREAT PLACE TO LIVE AND WORK FOR PEOPLE IN ALL STAGES OF LIFE.

From shopping, restaurants, and sporting events to great schools and a wide range of housing availability, Allen has it all.

The Allen Public Library is a two-story building that is over 54,000 square feet and offers something for all ages. From the children’s zone and the Teen’Scape area to a 300-seat theatre, there is always something going on at the library to pique one’s cultural and educational interests.

Allen provides citizens with over 1,200 acres of parks and trails to enjoy. Allen boasts nature and hiking trails, spray grounds, a community ice rink, and a new innovative golf venue. There is something active for every member of the family.

Allen provides a range of shopping and dining options. From upscale boutiques at Watters Creek at Montgomery Farm to price-savvy shops at Allen Premium Outlets, Allen is a shopper’s paradise. The Village at Allen is also a great place to find restaurants, boutiques, and big-box stores.

Allen has multiple celebrations and festivities that occur throughout the year. Here are a few notable events:

The Summer Sounds Concert Series takes place at the Joe Farmer Recreation Center Amphitheater and features music from local artists. The series takes place every Monday evening for four weeks during the summer and the music varies from classical to contemporary pop music.

A  fun family tradition, the Eggcellent Family Adventure takes place at Allen Civic Plaza. Community organizations and businesses participate in trick-n-treat fashion by setting up tables for children to visit and retrieve egg-filled goodies. In addition to crafts, face-painting, and activities, the Easter Bunny makes an appearance.

In early December, the Rudolph Run draws a crowd to Main Street in downtown Allen. The festive event includes a non-competitive run, a one-mile run and the USATF-registered 5K Rudolph Run. Any one can participate, regardless of age or skill level.

A magical night of live entertainment sure to fill you with holiday cheer. The event includes a visit from Santa and his elves, Candy Cane carriage rides, Comet Express toy train rides and more festivities, culminating in the annual lighting of Allen’s 46-foot Christmas tree with more than 20,000 lights.

In October 2014, residents and business owners met to re-examine how the city will continue to grow and develop over the next 15 to 20 years.  As a result of their participation, the city adopted “The Allen 2030 Comprehensive Plan” to establish goals and growth strategies. The growth plan pays special attention to community livability, mobility, as well as land use and design.

Every two years, the City Council receives a report summarizing the implementation of the 2030 plan. At these meeting the plan will be reviewed and updated as needed. Residents can stay up-to-date on the city website, www.cityofallen.org. 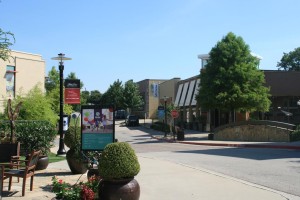