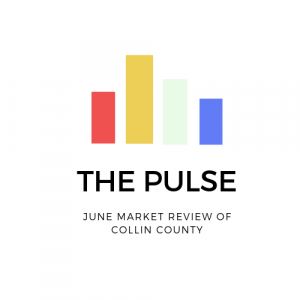 The Collin County Association of Realtors (CCAR) reports that June brought many of 2019’s upward trends to a halt, while still delivering the highest median sales price ever reported by the CCAR Pulse.

June was also the first month since January 2019 to have fewer listings under contract (-0.8%) than the year prior, while simultaneously showing a sharp decline of closed home sales than the month prior (4,649 vs. 5,365). Despite June’s dramatic departure from growth, the projected closed sales in June showed a slight increase from June 2018 (0.7%).

Nevertheless, June did allow some trends to remain in tack. The number of days on market continued to decrease- homes remained on the market for 47 days in June 2019; the fewest amount of days on market for the CCAR Pulse area since October 2018 despite a 30.6% increase from June 2018.

Sellers who successfully snagged a buyer in June received 96.6% of their original listing price and, thanks to a 2.3% increase in median sales price from June 2018, received the highest median sales price ever reported by the CCAR Pulse ($332,500). This increase contributed to lower affordability for buyers, indicated by a Housing Affordability Index of 101.

David Alan Cox, CCAR 2019 President, was not surprised by June’s market activity. He explained, “Many home sellers and buyers want to accommodate school schedules; completing transactions in the late spring to early summer to allow children to be settled prior to the start of school. June served as a month of market correction.”

While many homebuyers spent June barbequing with their new neighbors, many are curious as to how many people were motivated to move in July.