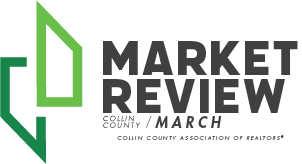 Nonetheless, demand continued to outpace inventory in March as 39.4% more homes went under contract than a year ago, resulting in 67.7% fewer homes for sale than in March 2020—despite an increase in new listings. The month’s supply of homes remained at 0.7 months in March, a market is considered balanced when there is a 6-month supply of homes for sale.

Additionally, homes continued to sell quickly and for more money than the year prior. In March, homes remained on the market for an average of 27 days, 54.2% less time compared to the same time last year. On average, homes went under contract for 102.5% of their original list price, with a median sales price of $395,000—a 14.5% increase in price from March 2020. The hottest price point last month continued to be homes priced $300,000–$399,000—accounting for 32.5% of homes sold.

“Last March, when one’s home became their safest space and epicenter of their life, the Collin County Association of Realtors advocated for real estate to remain an essential service. As a result, Realtors adapted to safely serve their clients. I cannot imagine what this market would have been like if demand had been pent-up and delayed. It would have been a tsunami of buyers—more so than what we’re seeing now,” said CCAR President Ron Leach.