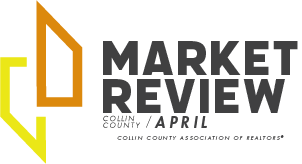 The Collin County Association of Realtors (CCAR) reports that despite increased new listings, demand continued to drive prices higher in April as homes sold faster and for more money than months prior.

While buyers had more new listings to consider in April compared to the year prior (1,983 vs. 1,581), demand continued to outpace inventory as 62.6% more homes went under contract last month than in April 2020. April’s high demand resulted in 65.5% fewer homes for sale than the year prior, despite increased new listings. The month’s supply of homes remained relatively flat at 0.9 months, up from 0.7 the two months prior—a market is considered balanced when there is a 6-month supply of homes for sale.

“Last April a large portion of the population was, understandably, reluctant to let anyone inside their home. This April we have our footing back and as a result saw a large increase in new listings, however, not nearly enough to satiate the demand,” said CCAR President Ron Leach.

We have come a long way since April 2020. The progress over the past year has allowed real estate transactions to plow full steam ahead, no matter how wild of a ride it is.